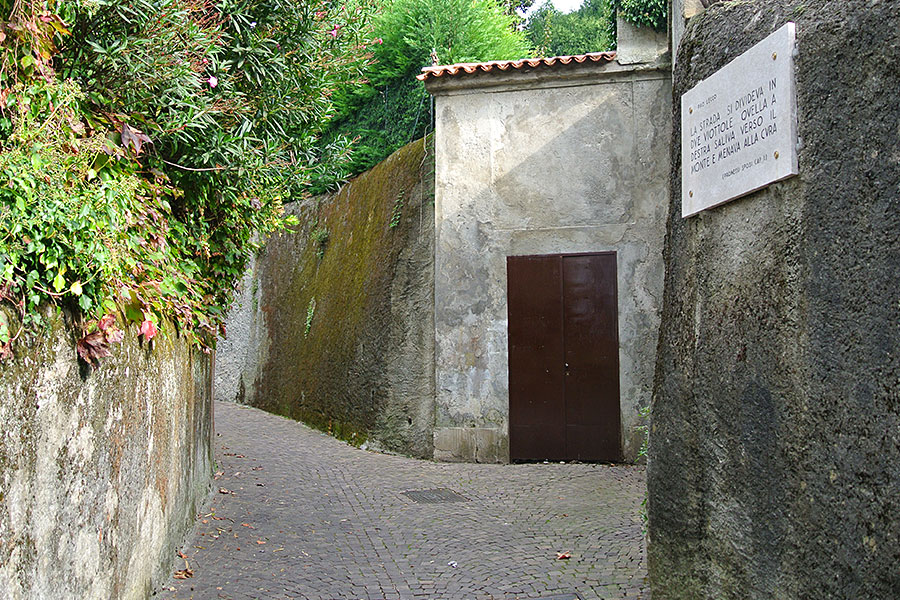 Don Abbondio and the bravoes: a meeting that determines the beginning of the love story of The Betrothed.

From the meeting between the fearful Don Abbondio and the bravoes comes to life and unfolds the troubled love story between Renzo and Lucia.

Alessandro Manzoni describes Don Abbondio while comes back to home, and it seems we are walking with him along a straight road, that at some point forks: on the right there is the road to Mount Resegone, on the left the road leading down into the valley, characterized by the presence of a low wall. The two paths were joined together with a tabernacle, depicting slithering figures, flames, purgatory’s souls. Right here the priest makes the meeting that determines the beginning of the history described by Manzoni.

You can identify the path Don Abbondio runs with the alley on the left rising from the round in Viale Montegrappa to the district of Acquate.
The tabernacle mentioned by Manzoni is located in via Tonio e Gervase: it was rebuilt and does not host any pictorial representation. A plaque on the side traces The Betrothed’s text.
Via Tonio and Gervase is passable even downhill, 10 m from the church of Don Abbondio Acquate, not to be confused with the street called Salita dei bravi. 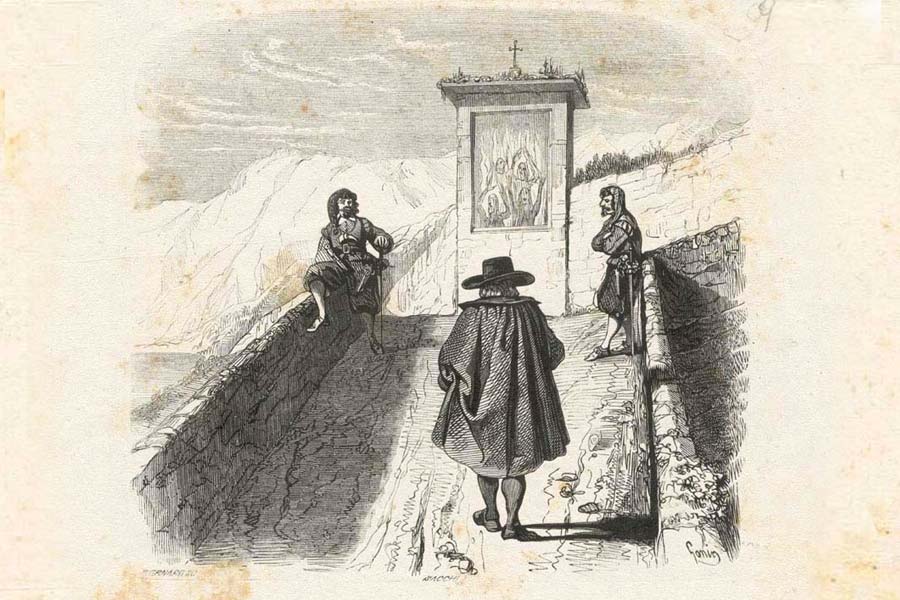 Cover image: illustration darft for the edition of The Betrothed dated 1840 Library Braidense

Towards evening, on the 7th day of November, 1628, Don Abbondio, curate of one of the villages before alluded to (but of the name of which, nor of the house and lineage of its curate, we are not informed), was returning slowly towards his home, by one of these pathways. He was repeating quietly his office; in the pauses of which he held his closed breviary in his hand behind his back; and as he went, with his foot he cast listlessly against the wall the stones that happened to impede his path; at the same time giving admittance to the idle thoughts that tempted the spirit, while the lips of the worthy man were mechanically performing their function; then raising his head and gazing idly around him, he fixed his eyes upon a mountain summit, where the rays of the setting sun, breaking through the openings of an opposite ridge, illumined its projecting masses, which appeared like large and variously shaped spots of purple light. He then opened anew his breviary, and recited another portion at an angle of the lane, after which angle the road continued straight for perhaps seventy paces, and then branched like the letter Y into two narrow paths; the right-hand one ascended towards the mountain, and led to the parsonage (Cura); that on the left descended the valley towards a torrent, and on this side the wall rose out to the height of about two feet. The inner walls of the two narrow paths, instead of meeting at the angle, ended in a little chapel, upon which were depicted certain long, sinuous, pointed shapes, which, in the intention of the artist, and to the eyes of the neighbouring inhabitants, represented flames, and amidst these flames certain other forms, not to be described, that were meant for souls in purgatory; souls and flames of a brick colour, upon a ground of blackish grey, with here and there a bare spot of plaster. The curate, having turned the corner, directed, as was his wont, a look toward the little chapel, and there beheld what he little expected, and would not have desired to see. At the confluence, if we may so call it, of the two narrow lanes, there were two men: one of them sitting astride the low wall; his companion leaning against it, with his arms folded on his breast. The dress, the bearing, and what the curate could distinguish of the countenance of these men, left no doubt as to their profession. They wore upon their heads a green network, which, falling on the left shoulder, ended in a large tassel, from under which appeared upon the forehead an enormous lock of hair. Their mustachios were long, and curled at the extremities; the margin of their doublets confined by a belt of polished leather, from which were suspended, by hooks, two pistols; a little powder-horn hung like a locket on the breast; on the right-hand side of the wide and ample breeches was a pocket, out of which projected the handle of a knife, and on the other side they bore a long sword, of which the great hollow hilt was formed of bright plates of brass, combined into a cypher: by these characteristics they were, at a glance, recognised as individuals of the class of bravoes. 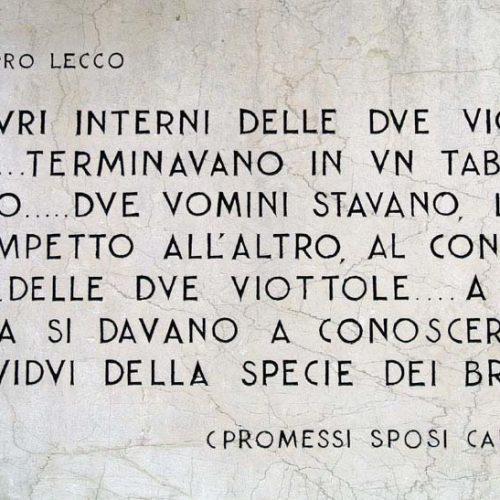 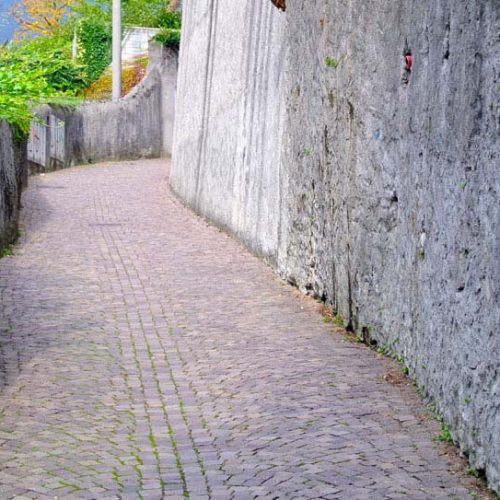 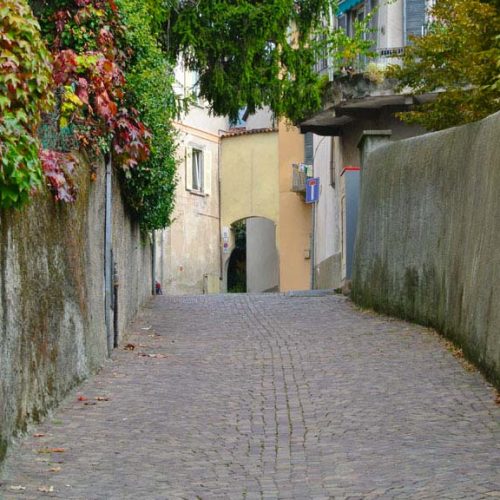 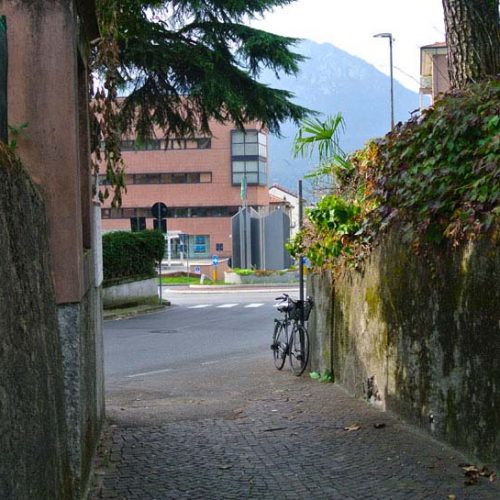 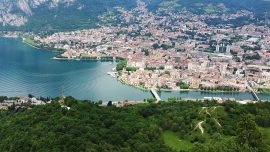 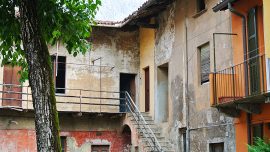 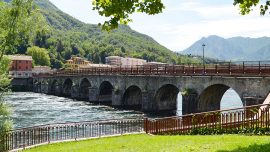 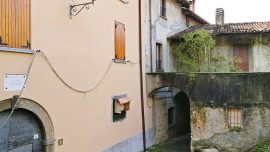